For the
discerning woman

The foundation of the Great Lengths mission is to source, treat and supply 100% human hair extensions of the highest quality in an ethical manner. In fact, Great Lengths is still the only hair extension company that sources and processes its own hair.

Great Lengths is the only hair extension company in the world that guarantees with documented support that all Great Lengths hair has met the following criteria: 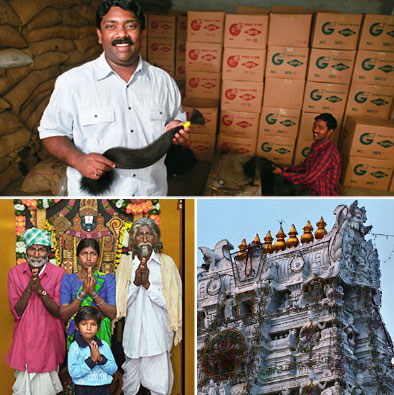 Where does Great Lengths hair come from?

For over 5000 years, Hinduism has been entwined in the rich culture of India. For Hindus, every part of life is a sacrifice, a giving of oneself or ‘Jivayajna’ for which one receives true spiritual fulfilment. On a daily basis, devout pilgrims travel to temples across India to pay homage to their gods by making an offering to the temple.

Tirupati Venkateswara Temple (or the Temple of Seven Hills), is one of the largest and most popular of Hindu temples. Located on the top of Tirumala hills, this temple attracts thousands of worshippers a day from all over the world who queue up from early in the morning to late at night. Worshippers donate objects such as gold trinkets, personal possessions or their hair, a symbolic offering to show their devotion to the deity. This ritual shaving of one’s hair is known as tonsuring.

In the past, tonsuring was a symbol of repentance, a devotee would ask for forgiveness and their shaved head was a sign of starting a new life. Today, pilgrims make an oath with god and should their prayers be answered, they shave their heads as a precious sacrifice and sign of gratitude and faith.

Prior to the advent of hair extensions the donated hair was often used for the manufacture of oil filters for cars (the microscopic hair cuticles would trap impurities when compacted into a filter) or simply for the filling of mattresses to sleep on. Traditionally, no money changed hands in this process.

In more recent times, the production of wigs, toupees and later real hair extensions has created a market for the donated hair. The increased demand has meant that the temples fetch a good price in exchange for the hair and these funds are then used to aid the poor. Whilst those donating don’t receive monetary payments, the temples auction off the donated hair and make $100-400 per kilo of hair depending upon the quality. A small portion of this income is used for regular upkeep of the temple and pays the wages of the people that work there. The remaining money is invested into the local community, providing food, shelter and medical assistance to those in need.

All Great Lengths hair is 100% traceable and sourced directly from these temples. Learn more by watching this video.

The benefit of this Great Lengths patented process goes beyond the Great Lengths hair quality, it makes Great Lengths International the only Company that can factually state that there is no negative Eco impact from our production process. This point becomes magnified when compared to the significant negative eco impact created by all hair processing facilities, of which the overwhelming majority are located in China and Indonesia where there are no effective regulatory agencies to monitor such production.

The hair is placed in osmosis baths where the black pigments are gently lifted from deep inside the cortex of the hair. This process of gently removing the pigment from the hair can take anywhere from 10 to 25 days to get it to the absolute lightest shade of blonde.

Other inferior products use a typical method of lightening/bleaching hair. Ammonium derivatives only break up the colour pigments but they continue to take up space inside the hair cortex. These chemical processes also damage the cuticle layer, thus compromising the hair’s texture and condition! This results in dry, fragile hair with split ends. Silicones are applied to disguise the damage but these will soon disappear after a few washes.

The Great Lengths patented de-pigmentation process actually removes the colour molecules without affecting the condition of the hair. This method is not only kinder to the hair but more effective. Great Lengths colour inserted into the hair shaft does not fade like traditional colouring/dyeing methods.

Great Lengths hair is subjected to a special process of pigmentation that does not require hair color, peroxide, or bleach. The new pigment has a clean, empty space to occupy. This ensures that the molecule sits firmly in place and thus the color will not fade out… just like your cashmere sweater!

Because our hair strands are not treated with harsh chemicals normally used to alter color, the hair’s structural integrity, condition and texture are maintained.

Also the traditional color process does not effectively cover the hair’s original color molecule, which means that after several washes the new color will fade away and could possibly leave a less desirable result.

Great Lengths hair has the luxurious, silky feeling of virgin hair that has consistent quality.

After this delicate process of osmosis and re-pigmentation, each bundle of hair is carefully selected and blended by colour specialists in Rome, to achieve depth and authentic looking colour in the extensions. It is then hand brushed to remove any single strands that are either too long or too short. Leaving only the perfect lengths for the individual hair extensions.

Great Lengths hair is classified as remy hair, meaning that all the cuticles are facing the same direction, giving a smooth, tangle-free result. This is achieved through keeping the hair in their original bundles throughout the entire process. When non-remi hair is used for hair extensions, it is put through an aggressive acid treatment to strip it of its cuticle layer which prevents it from tangling. However, this process leaves the hair opaque and brittle, much like chemically treated, overstressed hair. The hair is then covered with a siliconlayer which gives it a healthy, shiny look. But this protection has a short life and usually leaves the hair dull and brittle again after only a few washes.

In 1992, Great Lengths International developed and patented the first pre-tipped, synthesized keratin bond polymer. Because of this ground breaking technology, many if not all extension companies now claim a “keratin bond” as their form of attachment. Factually, any form of keratin can be combined with any type of polymer to qualify as a “keratin” bond, regardless if it makes any functional difference or benefit in the bond itself.

For example, when you wash your hair or get it wet, the hair shaft expands. When it dries it contracts. Bonds that do not possess such function will soon begin to shed the extensions and ultimately slide off the natural hair completely because the bond is being stretched with no capacity to contract each time the natural hair expands and contracts. This is a Great Lengths exclusive feature.

Today, whether you are a first time user or have been with us for many months, you can be sure that when you choose Great Lengths hair extensions, you are choosing the quality, every time.